A nearly century-old fountain in the middle of Stanley Park's Lost Lagoon could get a new lease on life
Jul 9, 2020 2:24 PM By: Lindsay William-Ross 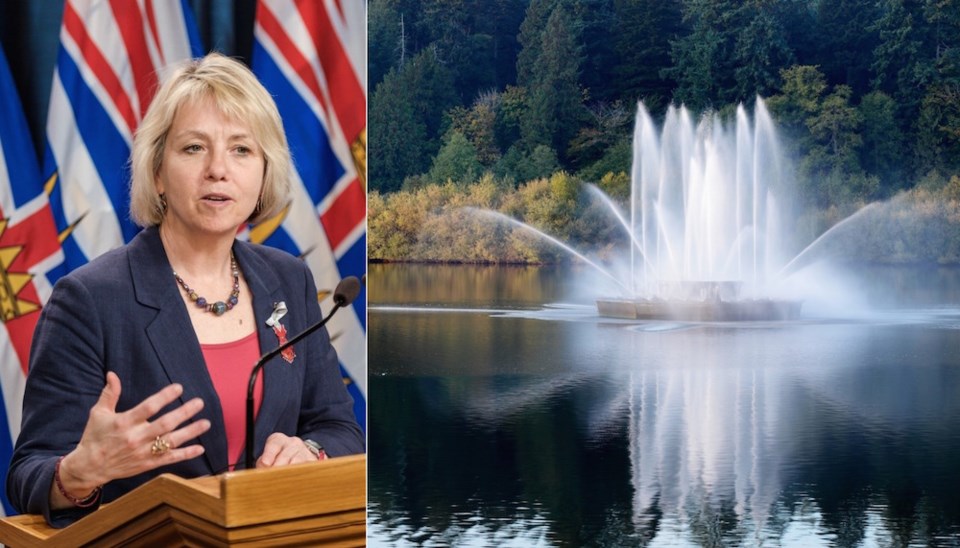 A nearly century-old fountain in the middle of Stanley Park's Lost Lagoon could get a new lease on life - and a new name - if the creator of a new online petition is persuasive enough.

The Jubilee Fountain, also known as the Lost Lagoon Fountain, was built in 1936 for the city's 50th anniversary, the Golden Jubilee. The fountain was then restored in 1986 for Expo 86, and again in 2010, but has not been functioning for the last few years. In its working days, the fountain also lit up, and was a cheerful sight for many who came and went inside Vancouver's iconic northwestern park. Further, the Jubilee Fountain has a Heritage Monument designation

However, the fountain has been sitting dormant for some time. Due to its age and condition it has been non-operational, as the city explores their options for what to do with the landmark water feature.

Now an online petition is calling for the City of Vancouver to restore the fountain and rename it The Dr. Bonnie Henry Fountain in honour of our provincial health officer.

"Dr. Bonnie Henry has helped guide and protect our communities with one of the best COVID-19 response strategies in the world. We are deeply grateful for her care, wisdom, level-headed decisiveness – and her earnest counsel to 'Be kind, be calm and be safe,'" attests the petition.

"When this crisis is finally over, let’s thank her with a commemorative gesture that not only expresses our deep gratitude, but is also a permanent reminder to British Columbians that life is as fragile as it is beautiful."

Citing the Jubilee Fountain's role as "a symbol of human ingenuity and natural beauty working together," the petition continues to say that "restoring and renaming it The Dr. Bonnie Henry Fountain would be a worthy and inspired way to help convey our thankfulness to ‘Dr. Bonnie’ for all her tireless and brilliant efforts to keep us safe."

"With this petition, we’d like to humbly ask the great Parks Board team for their support and advocacy in making the Dr. Bonnie Henry Fountain a reality."

So far, fewer than 150 people have signed the petition.

We have reached out to the Vancouver Park Board for comment they provided V.I.A. with the following response: "The Park Board has not received any formal request to rename the Jubilee Fountain in Stanley Park. Currently there are no plans to rename the fountain. Any such decision would be considered by the Commissioners."