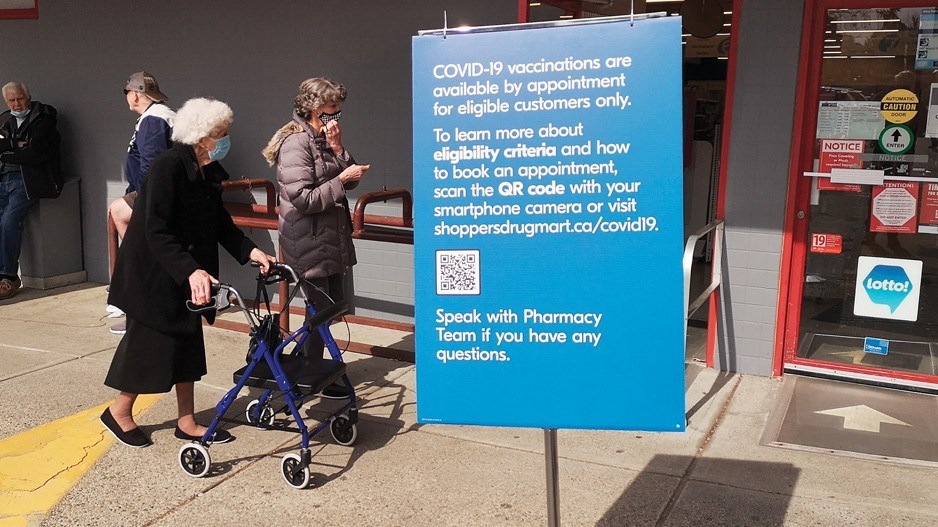 COVID-19’s threat to public health in B.C. has surged recently with the rise of variant strains, particularly P.1.

Tracking the exact number of cases in B.C. of this mutant strain of COVID-19, first identified in Brazil, may not be possible in the weeks ahead, however, because of a new provincial strategy for how health officials should spend their time, and what they should focus on.

Scientists believe that P.1 can spread more easily than other strains, may cause more serious illness in some, and may be resistant to vaccines.

The path to finding P.1 cases is to run positive COVID-19 samples through polymerase chain reaction (PCR) tests that determine whether the cases are of variant forms of the virus, but do not specify which kinds. Scientists then conduct genome sequencing to determine specific variants.

The standard process through the first week of April was for BC Centre for Disease Control researchers to screen about 90% of new positive COVID-19 cases with PCR tests to determine if the cases were likely variants of concern. Researchers would then take any positive test and conduct full genome sequencing to determine the exact variant in the infection.

The process that provincial health officer Bonnie Henry outlined on April 8 will be to do fewer full genome sequencing tests on cases that are known through PCR test results to be likely variants of concern.

"We need now to shift our strategy so that we can use the whole genome sequencing capacity we have in B.C. to do more systematic testing and sampling of all of the strains to make sure we're not missing another important one that may be arising," Henry said.

"We don't need to test so much anymore to understand if we have the [B.1.1.7] U.K. strain here, because it is here, and it's increasing, and it is causing more transmission in communities around the province."

Genome sequencing in the future will focus more on monitoring to determine whether someone has been reinfected, whether there have been what Henry called "vaccine failures," and for what she called "escape variants," which may not respond well to B.C.'s immunization program.

The result, however, is that there could be less clarity on how fast the P.1 variant in B.C. is spreading because researchers are. not likely to conduct as many genome sequencing tests to seek to find those cases.

Regardless, by March 16, researchers had discovered 34 confirmed P.1 cases in B.C.

Henry started sounding the alarm about “variants of concern” in February.

Those variants include P.1, B.1.1.7 and the B.1.351 strain, first identified in South Africa. There are more than 100 other variants, Henry said, but the others do not meet the criteria to be a variant of concern, such as that they either do not spread more easily, are not thought to cause any more serious illness, or do not appear to be resistant to vaccines.

Other variants found in B.C. include B.1.525, first found in Nigeria, and other ones from California, India and the Philippines.

On March 25, Henry said that of the roughly 1,600 people in B.C. who were younger than 60 and had been admitted to hospital with any of the three main variants of concern, about 30% landed in intensive care units (ICU).

That ICU admittance rate was 11 percentage points higher than the rate was for the same demographic hospitalized with any form of COVID-19. This, Henry said, showed that variants of concern carry a higher risk of serious illness than other strains of the virus.

Henry first acted on her P.1 concerns on March 29, when she said that a “worrisome cluster” of P.1 infections at Whistler Blackcomb had helped prompt her to shut the resort down. She allowed other ski resorts across the province to remain open.

Henry added at that press conference that not only was the P.1 variant more transmissible, but it also had “been shown in some parts of the world to be less amenable to the vaccine.”

B.C., as of April 9, had yet to record a death among anyone who had contracted a variant of concern.

Henry’s comments on the disease have been backed up by studies.

One non-peer-reviewed study on medrxiv.org found that the P.1 variant can transmit about 2.6 times faster than more dominant strains.

Brazilian case counts surged in February in part due to P.1’s increased spread. Not only were there additional cases in Brazil, but there were more serious infections in younger people.

The country’s COVID-19 death count grew to be nearly 4,200 on April 6, which is close to the U.S. record for daily COVID-19 deaths – 4,476 recorded on January 12, according to Johns Hopkins University data.

France suspends all Brazil flights due to virus variants
Apr 13, 2021 11:17 AM
Comments