Local family behind national campaign calling for policies that specifically prioritize people with Down syndrome and other developmental disabilities
Mar 16, 2021 3:54 PM By: Cornelia Naylor 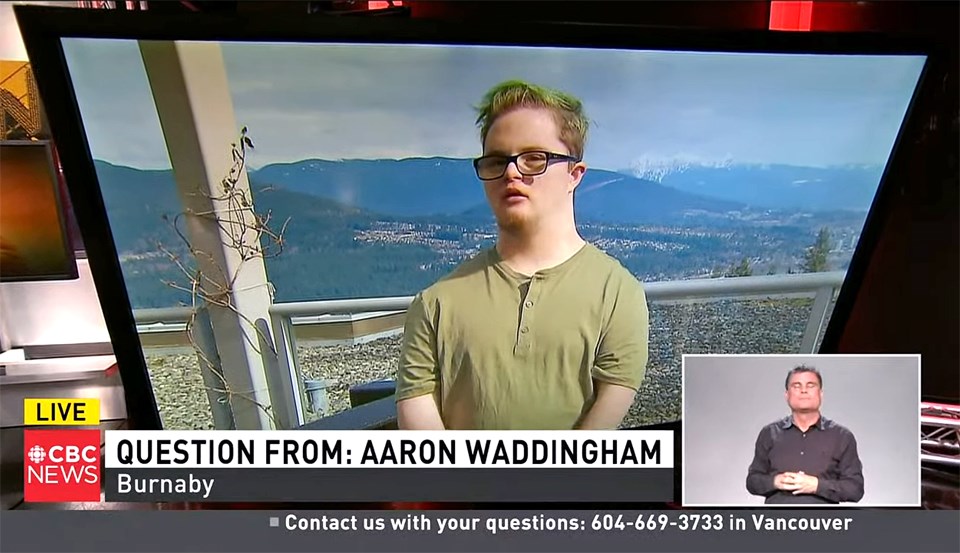 It’s been almost a week since a Burnaby teen with Down syndrome asked B.C.’s health minister why the government isn’t listening to disabled people and giving them the vaccine “right now.”

But he and his family have heard nothing but “crickets” from province on the issue since then, they say.

“Do you care about disabled people or not?” 17-year-old Aaron Waddingham asked Minister Adrian Dix in a pre-recorded question aired on March 10 during a CBC online public town hall about the COVID-19 vaccine.

In response, Dix said his government cared “very much,” explaining that people with disabilities who live in group homes are being immunized already in Phase 2, and priority will be given to people with “a variety of health conditions” including people with developmental disabilities in Phase 3.

“We are giving priority to people with disabilities,” Dix said.

But that’s not how Aaron’s parents see it.

Mike Waddingham and Sue Robins say B.C. has failed to properly prioritize people with disabilities so far, and language around who will be eligible for the vaccine early in Phase 3 is still vague and confusing.

The province’s vaccine plan says people between the ages of 16 and 69 “with very significant developmental disabilities that increase risk” will be eligible to get the vaccine in April.

But Aaron’s parents don’t know if that will apply to him.

In Ontario or Alberta, they’d know, since those provinces now specifically prioritize people with Down syndrome and other developmental disabilities.

Waddingham and Robins are behind a national campaign that has pushed for such policies since February.

The Ready for My Shot campaign features “selfies” of self-advocates with disabilities saying why they need the vaccine.

Will BC prioritize vaccination for the developmentally disabled?

Or continue to ignore peer reviewed science that says these vulnerable people are 5 to 10 times more impacted by COVID?

Down syndrome comes with health as well as intellectual challenges, and Aaron said he’s had “pneumonia problems” twice in his life already.

“It was hard to breathe,” he said.

“There’s something about blood oxygenation, and that’s what they measure,” Waddingham said, “and, let me tell you, as a parent, when that drops below 90% and they start bringing out the oxygen tent, that’s a scary time.”

Because of Aaron’s elevated risk from COVID, no one in the family left their Burnaby Mountain condo for 60 days at the beginning of the pandemic, and Aaron still hasn’t returned to school at Burnaby North Secondary.

When asked why the family doesn’t simply wait it out now that the vaccination program is in full swing, Waddingham said that could mean another three months out of his son’s life after an already difficult, lonely year.

“Why would we deny him those three months?” Waddingham said. “He’s been isolated far more than many of the people who will be vaccinated before his turn comes, and that’s just basically unfair.”