Five students and one staff member are among those identified so far in followup testing after seven schools in Surrey and North Delta had exposures later found to be connected to the B.1.1.7 variant
Feb 25, 2021 3:54 PM By: Julie MacLellan 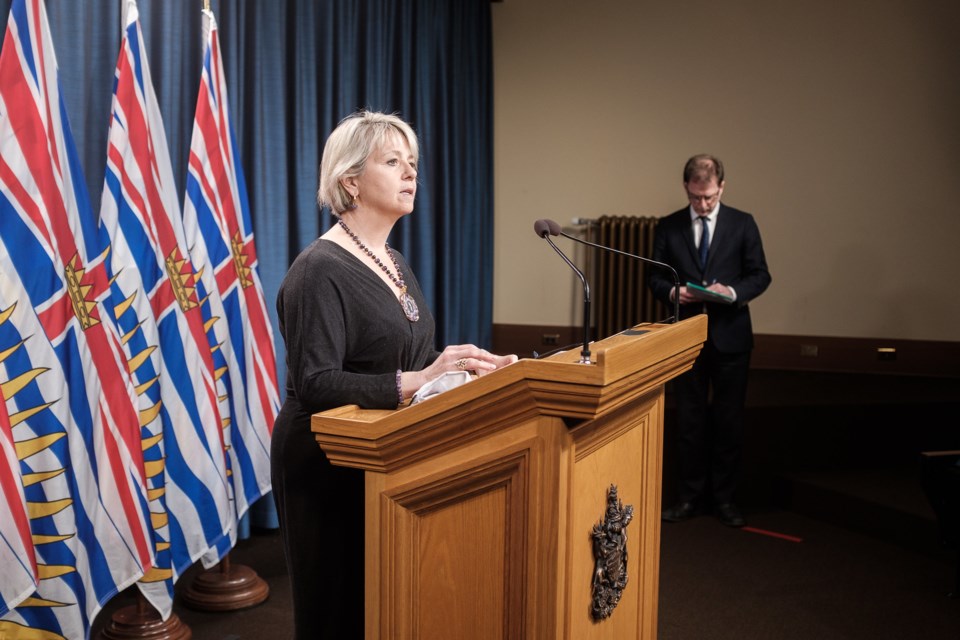 Dr. Bonnie Henry and Health Minister Adrian Dix, seen here at their Feb. 23 briefing, provided another update Feb. 25 about the COVID-19 pandemic. Henry provided details of the B.1.1.7 exposures connected to schools in Surrey and North Delta.Government of B.C.

Five students and one staff member at two Surrey schools have tested positive for COVID-19 so far in an investigation of variant cases in that school district.

Over the weekend, six schools in Surrey and one in North Delta were identified as having had exposures concerning the B.1.1.7 variant (formerly referred to as the U.K. variant). Because the variants are considered to be more transmissible than the original virus, health officials started an extensive round of testing amongst potentially affected staff and students.

Provincial health officer Dr. Bonnie Henry provided an update on that testing at her briefing Feb. 25.

So far, she said, 83 people have had a point-of-care test (administered in cases where an immediate result was paramount), while another 201 have had the standard PCR tests.

Of those, six people at two of the affected schools – Surrey Traditional and Woodward Hill Elementary – have tested positive for COVID-19. Five were students, and one was a staff member.

Henry noted it’s not yet known whether those COVID-19 cases are themselves variants of concern, but further genome sequencing is now being done to determine that.

She said the testing is part of the “special attention” the province is now paying to variant cases, particularly when those crop up in settings such as schools.

B.C. is now doing screening of positive COVID-19 tests to identify which cases may be one of the variants. Right now, Henry said, the province is able to screen 75 to 80% of its positive cases every day; by next week, it will be screening 100% of all positive cases to identify which may contain markers that indicate a variant. All those cases will then undergo further testing to confirm whether or not they are, in fact, variant cases.

Seventy-one of those have been in the Fraser Health region, which covers the area from Burnaby to Boston Bar (including New Westminster).

Henry stressed that B.C.’s best defence against the variants is to continue to do all the things that are already being done.

The Surrey cases and one earlier case at Garibaldi Secondary School in Maple Ridge three weeks ago remain the only variant cases connected to B.C. schools so far. None have been identified in New Westminster or Burnaby to date.