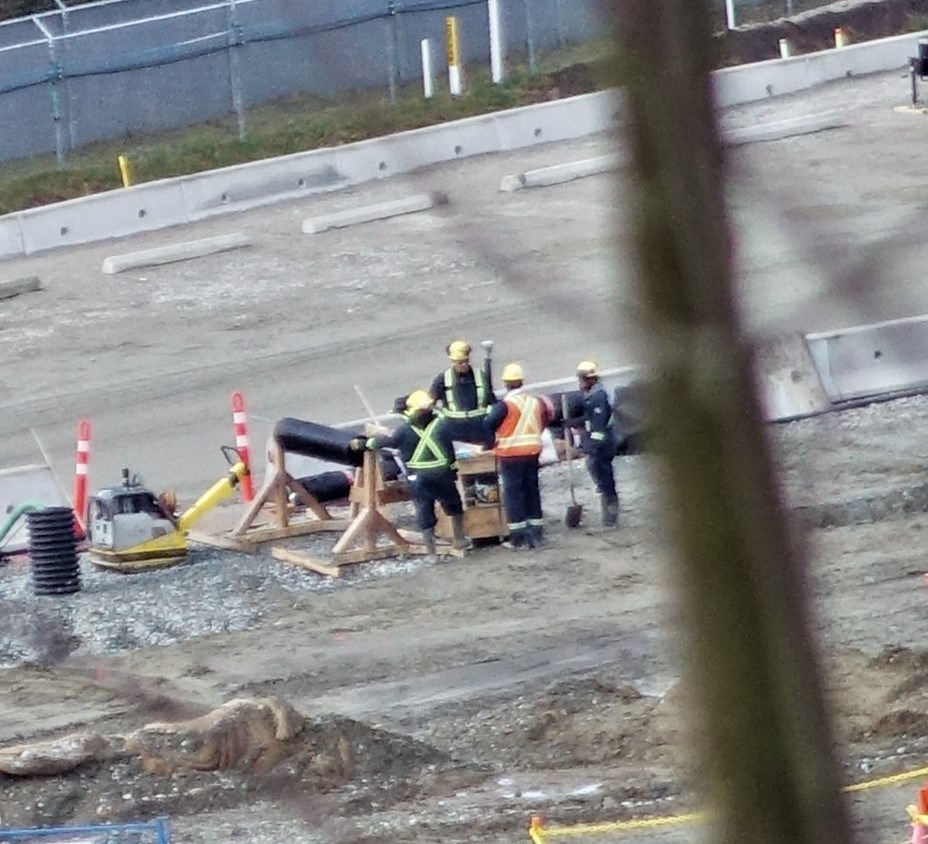 Four workers were sent home following an inspection that found more than three dozen violations by contractors in three days.

Canadian Energy Regulator staff conducted a compliance inspection at the Westridge Marine Terminal (Dec. 1) and the Burnaby Terminal (Dec. 2) on Burnaby Mountain. The inspection also focused on “Spread 7,” the section of the pipeline expansion construction being done in the Lower Mainland, on Dec. 3. Work at each of these sites is contracted out to Kiewit-Ledcor Trans Mountain Partnership (KLTP).

Over the course of those three days, the inspector found 37 violations of three COVID protocols set out by Trans Mountain’s COVID-19 response plan.

Those protocols include mandating that physical distancing of two metres must be followed when possible, and when it isn’t possible, workers must wear face masks that completely cover the nose and mouth. Supervisors and health and safety officers are expected, per the protocols, to monitor the effectiveness of the plan and enforce the protocols.

Trans Mountain officials told the CER inspector the contractor’s disciplines for violating the protocols range from a verbal warning up to termination, according to a CER report.

“At each site, workers … were observed not adhering to the requirements outlined in the COVID protocols, despite the company messaging and signage around sites,” reads the report.

“These observations were not limited to a specific work site, rather the non-compliances were observed throughout the Lower Mainland region,” reads the CER report. “Based on the inspection officer’s observations, there are systemic non-compliances with respect to implementing measures to prevent the transmission of COVID-19 across worksites in the Lower Mainland region which are not being effectively addressed by Trans Mountain.”

The regulator stopped short of ordering a suspension of work, instead making two general orders to stop violating the COVID protocols and to take measures to ensure the protocols are followed.

The regulator further made three more specific measures, including ordering two workers not wearing masks properly in Coquitlam, along Spread 7, to immediately put on masks and to leave the worksite for the rest of the day.

In a separate report, on Dec. 2, an inspector also ordered two workers travelling together in a truck at the Burnaby Terminal without wearing masks to put on masks and leave the worksite. The inspector further ordered Trans Mountain to ensure those two workers were “fully instructed” on COVID protocols before returning to work.

The standdown was also mandated to include a “clear description of the current COVID-19 statistics in Canada, in the health region, and an accurate number of confirmed COVID cases on the TMEP (Trans Mountain expansion project) to date.”

According to the latest figures on the federal government’s website, Canada saw 5,891 new cases on Sunday, with a total of 460,743 to date. The total active cases in the country was recorded at 74,059. More than 13,400 people have died in the country.

Here in the Fraser Health region, where all Lower Mainland Trans Mountain work is being done, 469 new cases were recorded on Friday, with 7,110 active cases and a total of 25,867 cases to date. Three hundred and thirty-five people have died of COVID in the region.

It’s not immediately clear how many cases Trans Mountain has seen.

The order was made on Dec. 4, and a followup was issued on Dec. 10 indicating the orders have been satisfied.