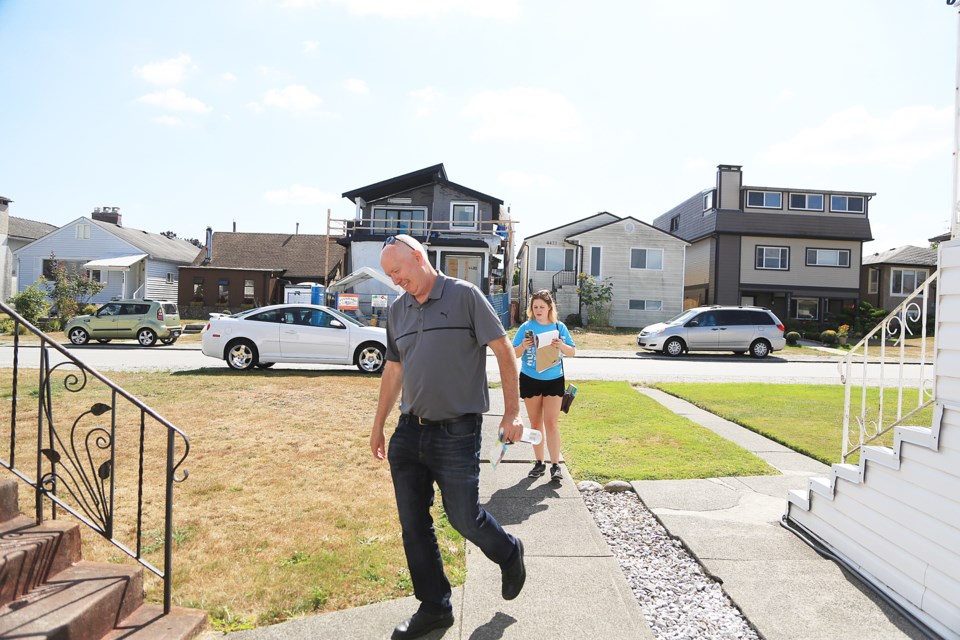 Mike Hurley door-knocks as part of his campaign to become mayor of Burnaby.Lisa King

Mike Hurley has promised a moratorium on demovictions in Burnaby if he becomes mayor.

He said he would stop all yet unapproved developments from progressing until new units are guaranteed for displaced people at the same rents.

The independent candidate made the vow as part of his “housing and affordability action plan,” announced at his campaign office Tuesday.

Hurley has put Metrotown demovictions – where low-rise rental apartment buildings have been demolished to make way for highrise condo towers – at the forefront of his campaign to unseat longtime incumbent Derek Corrigan.

“It's heartless, it's wrong and there's no excuse for it in our city,” he said.

Burnaby saw a net loss of 712 rental units between 2010 and 2017, while many Metro Vancouver municipalities saw increases, according to the Canada Mortgage and Housing Corporation.

The rest of Hurley’s action plan included a promise to strike a task force to recommend further strategies to address the dearth of affordable housing in Burnaby.

The plan includes several promises to “review,” “open discussions,” start “engagement with senior levels of government” and to consult other jurisdictions on best practices. Allowing laneway houses, building more co-ops and buying buildings to house displaced renters are all on the table, Hurley said.

But the former firefighter and union president did not commit to any concrete action, other than the moratorium.

Asked why he wasn’t making more promises, Hurley said: “The promise we're making is we're going to be bold and we're going to be aggressive in finding ways to get to affordable housing that's very much in need of stock in our city.”

The executive director of the Co-op Housing Federation of B.C. was present at Hurley’s announcement.

“We're very encouraged that a candidate for mayor is making such an aggressive announcement about a housing platform,” Thom Armstrong said.

The CHFBC is reaching out to candidates around the province, inquiring about their housing policies, he said. The group isn’t endorsing Hurley, but has given its seal of approval to his housing plan.

Armstrong said Corrigan and his fellow Burnaby Citizens Association members, who hold all seats on council, have done far too little to create affordable housing during their time in power. He said the BCA have been vocal supporters of CHFBC’s calls to senior levels of government for more spending on housing, but have failed to come up with their own effective strategies in the meantime.

Corrigan did not respond to a request for comment.