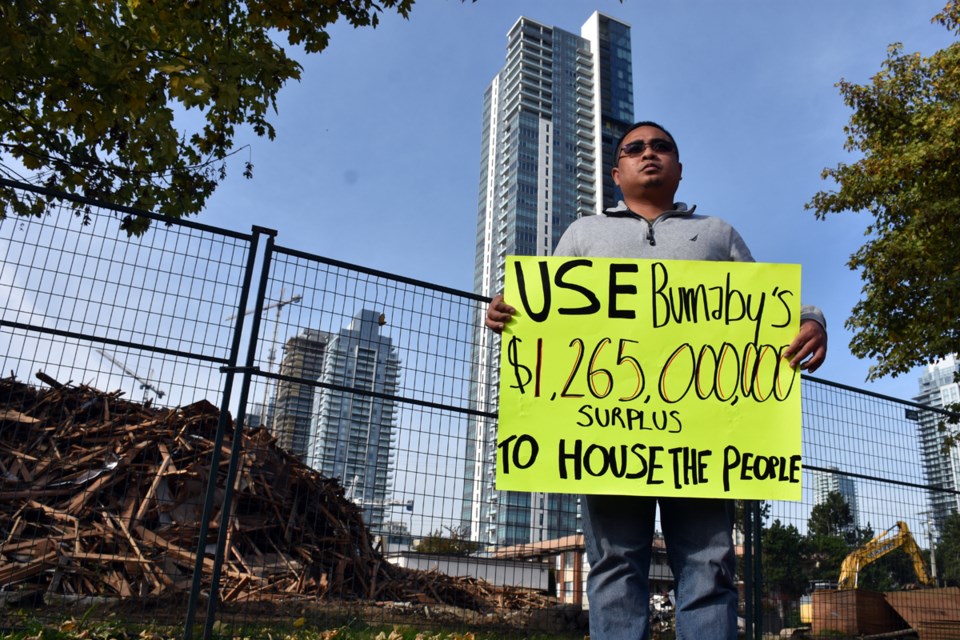 Housing activists are calling on municipal candidates in Burnaby to commit to spending the entirety of the city’s massive $1.3 billion fiscal reserves on affordable housing.

“We demand this to be used for non-market tenant-rental units at welfare and pension rates,” Emily Luba of Stop Demovictions Burnaby said at a press conference Thursday.

Stop Demovictions Burnaby members made the demand in front of a recently demolished apartment building at the corner of Sussex Avenue and Berresford Street in Metrotown – the epicentre of a rash of displacement in recent years.

The activists blame Mayor Derek Corrigan and current council made up entirely of Burnaby Citizens Association members for the hundreds of eviction notices issued in the area.

But they focused Thursday’s message squarely at the individuals seeking to replace those politicians. Both the Green Party (running six candidates for council) and independent mayoral candidate Mike Hurley have promised a moratorium on development causing displacement in the area – but that’s not enough, Luba said.

Luba said her group has met with both camps during the campaign and has pushed them to make bolder promises on housing. She said the Green Party responded by doubling its plan to spend $10 million a year on social housing to $20 million.

Allan Fernandez has lived in Metrotown for five years. He said he wants to live here longer, but lives in fear of being demovicted. pic.twitter.com/BCQEpJliNY

Allan Fernandez, who lives in another low-rise apartment building directly across the street from the now-vacant lot on Sussex, said his building was recently sold to a developer. He hasn’t been given an eviction notice, but believes it could come at any moment.

“It's an anvil waiting to fall over my head,” he said.

The internet service technician said he has made Metrotown home ever since he moved to Canada from the Philippines in 2013. His daughter is enrolled to start school a block away at Maywood in a year, but he’s not sure if he’ll still be living in the neighbourhood to take her there, he said.

Asked it he felt some relief hearing politicians promise a moratorium on demovictions, Fernandez said: “Promises were always made to be broken. That's the truth of it all.”

In a recent interview, Corrigan told the NOW the city has plans to spend the nearly $1.3 billion reserve money, including on new recreation centres and ice rinks.

“What good are those places if people can't actually afford to be in the city that has them,” he said.

Independent council candidate Claire Preston was present at the announcement. She said she's supports spending at least 80 per cent of the reserves on social housing.