Burnaby lags behind in COVID-19 vaccination coverage for certain ages 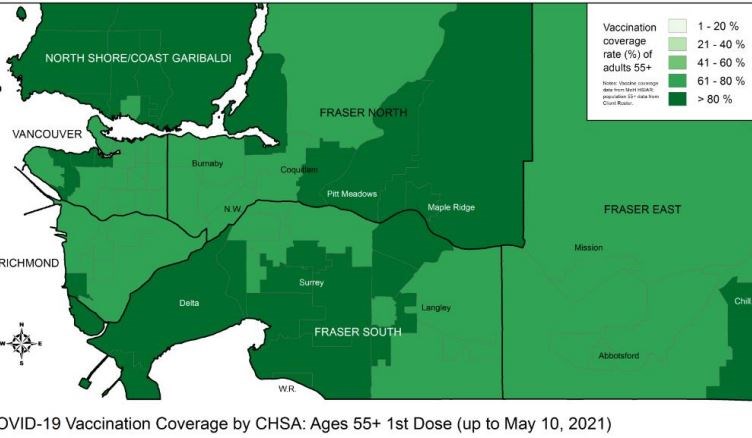 This maps shows Burnaby with a lower percentage of vaccination coverage for people aged 55 and older.BCCDC

Burnaby’s COVID-19 vaccine coverage is on par with the rest of Metro Vancouver and the Fraser Valley, but is lagging behind when it comes to seniors.

A new map from the BC Centre for Disease Control shows that people aged 55 and older have a vaccination coverage rate in a lighter colour than many parts of Surrey, plus Maple Ridge, Pitt Meadows, the North Shore and Delta.

The overall rate for people 18 and older in Burnaby is in the same range as the rest of Metro Vancouver and Fraser Valley.

B.C. health officials provided more than 60,000 doses of COVID-19 vaccine overnight Monday – the first time that they have reached that threshold.

Health officials have been saying for weeks that the province's vaccination effort was poised to ramp up, and there is finally evidence to show that this is happening.

"Our clinics are ramped up and we have ample vaccine supply," provincial health officer Bonnie Henry and Health Minister Adrian Dix said in a May 11 statement.  "Now, it is your turn to step forward and get protected with your COVID-19 vaccine."

Henry said May 10 said she expects the number of people getting second doses of vaccine to accelerate in the next week.

The province's battle against the virus appears to be winning in that several other metrics are also trending in the right direction.

The number of those in hospital rose by 11 overnight to 426.  Of those, 141 of those are sick enough to be in intensive care units – nine fewer than yesterday.

Two additional people are known to have died, while infected with COVID-19, in the past day, raising the province's death toll from the disease to 1,624.