The NOW takes a closer look at the Burnaby Fire Department's record for hiring women
Jun 8, 2021 3:15 PM By: Cornelia Naylor 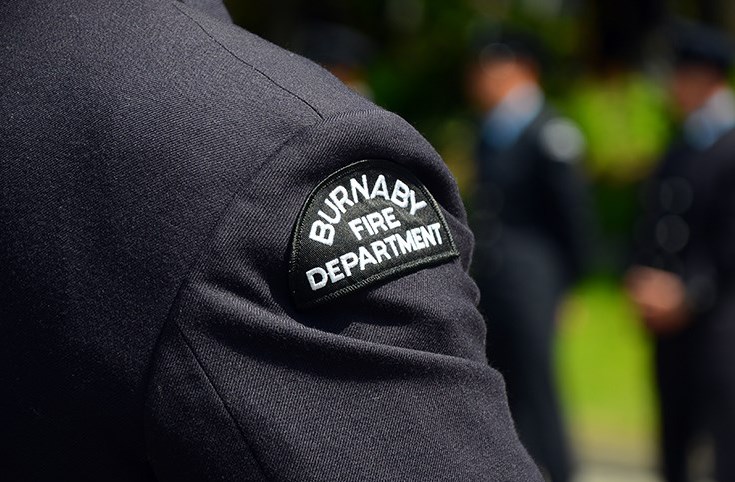 Not a single female firefighter was hired in Burnaby between 2002 and 2016.Cornelia Naylor

Burnaby’s fire chief was given a proverbial slap on the back last week for hiring five women last year – but a look at the fire department’s history shows it is only just beginning to make up for 14 years of lost time when it comes to hiring female firefighters.

After the presentation, Coun. Pietro Calendino made a point of congratulating Bowcock for the female recruits.

“We’ve asked the fire department to diversify for the last number of years,” Calendino said, “and I think they have been trying to recruit women to come into the force, but I realize that, in a job where sometimes you have to put 80, 90 pounds of equipment on, not that many women can manage that kind of stress, but I want to compliment the fire chief.”

An external review of the fire department in 2019 identified a lack of diversity as a major concern and recommended adding two positions for “community outreach, inclusion and diversity.”

Council responded by approving one extra captain position, and Bowcock recently told the NOW gender equity is important to council.

But that doesn’t always appear to have been the case for four current city councillors, including Calendino, who sat on council for 14 years while the city didn’t hire a single female firefighter.

The Burnaby Fire Department was one of the first in the Lower Mainland to hire women, starting with three in 1993, and might have been expected to be a leader in terms of gender equality within its ranks.

In the nine years that followed, however, the department hired just five more women compared to 99 men, according to annual reports.

And after 2002, the department stopped hiring women altogether until 2016.

Four of Burnaby's current city councillors – Calendino, Sav Dhaliwal, Dan Johnston and Colleen Jordan – were on council for the duration of that gap.

During part of that time, the city, the fire department, the local firefighters’ union and the fire chief were fighting off an explosive sexual harassment and discrimination complaint at the BC Human Rights Tribunal from one of Burnaby’s first female firefighters, Boni Prokopetz.

Two male colleagues who said they were bullied for supporting her also launched complaints.

Prokopetz alleged she had faced sexual harassment and discrimination from her very first day on the job and throughout the decade that followed – and that the firefighters’ union (headed at the time by now-Mayor Mike Hurley) had done nothing to help, according to tribunal documents.

Prokopetz told the tribunal she had spoken to Hurley in 2003 about being blackballed by fire crews but he had said there was nothing he could do to help her because “that would only make it worse.”

Prokopetz’s colleague, firefighter Garry Wilson alleged Hurley had told him in 2004 to “keep his head down” and stay out of the Prokopetz matter.

None of those allegations were ever tested at a hearing, and Prokopetz’s complaint was eventually resolved through a confidential settlement agreement in 2005.

A tale of two fire departments

Richmond Fire-Rescue went through a similar trial by fire about a year later when all of its female firefighters walked off the job, many citing widespread sexual harassment from their male coworkers.

Unlike the Burnaby union, however, the Richmond firefighters’ union launched a grievance against their employer on behalf of its female members.

And veteran mediator Vince Ready, who was called in to resolve the dispute, ultimately put out a report that said “juvenile and hostile behaviour” aimed at the female firefighters had “contributed to the barriers to women’s potential” but had in many cases been “condoned by the employer or addressed in a half-hearted fashion.”

The city also applied to the human rights tribunal for an exemption that would allow it to make 75% of its new hires in the fire service women and visible minorities.

Since then, nearly 16% of its new recruits have been women.

After the Prokopetz fiasco, the city simply stopped hiring female firefighters for more than a decade.

From 2005, when the confidential settlement was signed, to 2020, only 5% of new hires in Burnaby were women – and the five hired last year make up more than half of that.

“Through these difficulties that we went through, I think we were forced to examine ourselves, forced to be better,” he told the NOW.

Wilkinson said the fire service ought to reflect the community it serves and women firefighters make a “massive difference” to how a fire department serves its citizens.

He used the scenario of an older woman experiencing a medical emergency in bed in the middle of the night and what a relief it might be to her for a female firefighter to be taking the lead on that call.

“Is that not the best service we can provide?” asked Wilkinson.

Medical emergencies currently account for the majority of calls to fire departments.

According to its 2020 annual report, 42% of calls to the Burnaby Fire Department last year were for medical emergencies, compared to 32% for fires and related incidents, 16% for public service and 10% for motor vehicle incidents.

With five women hired out of a total of 30 new recruits in 2020 and two out of a total of six this year, the Burnaby Fire Department appears to be making up for lost time, but the effects of the 14-year gap in hiring women may be seen in its leadership and the absence of a network of women at all different seniority levels.

That means when it comes time to fill the deputy fire chief position recently vacated by longtime Burnaby firefighter Darcey O’Riordan, only one woman within the department will even be eligible to apply, according to Bowcok.

Last time the department had a deputy chief spot to fill, it passed over one of its few veteran female firefighters, who had been in the succession planning program for years.

Having women at all different levels of seniority is “hugely valuable,” according to assistant fire Chief Shelley Morris of the Surrey Fire Service, a department that has hired a consistent trickle of female firefighters since 1992, with no 14-year gap.

When asked about the advantages of dispersed levels of seniority, Morris said they create an informal network of mentorship and support for women in the department.

“It provides women who are just joining the fire service a way to look up and see how women have been successful all the way through … Those women see that, and they go, ‘Yeah, these women are thriving, they’re doing very well, they’re successful, they’re being promoted and they’re moving through the ranks without any barriers to them,” Morris told the NOW.

With more women hired in Burnaby since 2016, Bowcock acknowledged the benefits of more female firefighters getting a chance to work with other female crew members and sometimes even female officers.

“It creates and shows and develops that greater strength in the diversity on the shift and with each company, so it’s an overall very positive move as we start to increase those numbers,” he said.

But there’s no question the 14-year gap in hiring has left a hole where female officers would be today.

“You’ll have a period of time where there will be very few female fire officers at the fire company level in that there won’t be any graduating to those positions for some time,” Bowcock said.

When asked if he feels he’s been handed a problem that was created by others before him, Bowcock said every organization has things it excels at and things it struggles with or hasn’t “dealt as well with.”

As for Calendino’s pat on the back at last week's council meeting, Bowcock said the Burnaby Fire Department has done a better job of hiring women over the last three years but it still has “a long way to go.”