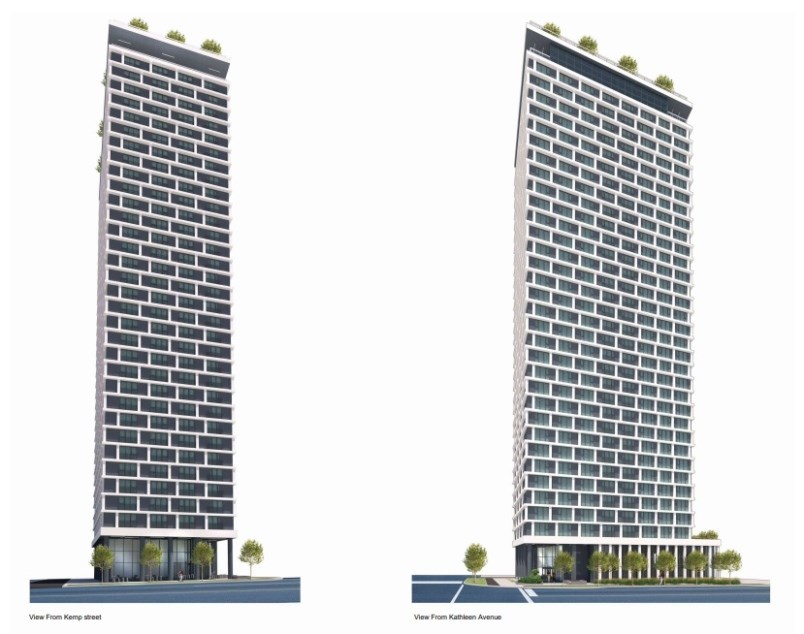 The original design for a Bosa rental tower in Burnaby. Coun. Colleen Jordan said she was told design changes will be made. Bosa graphic

A rental tower in Burnaby’s Metrotown area has finally been approved by council, with a few changes to what one of the project’s opponents called a “really awful” design.

Burnaby Coun. Colleen Jordan – along with Coun. Dan Johnston – still voted against the Bosa development planned for three lots in the 5900-block of Kathleen Avenue, but she said she was happy the project will see a few design changes. Jordan said during a previous council meeting in October 2020 that the project had a “really awful” design that didn’t include any balconies for residents. Jordan was also concerned about a lack of outdoor space for children and families.

“I was told that there will be changes to the final design,” Jordan told the NOW this week, with some balconies added and more amenities for kids to use.

Jordan said she still couldn’t support the project due to the density involved.

The development will see a 34-storey building on a lot of 1,727 metres squared.

In total, those 34 storeys would add up to a floor area of just over 20,000 metres squared, making for a floor area ratio (FAR) of 11.67 – well over the limit allowed by the zoning bylaw.

The base allowable density is for 6.1 FAR, with an additional 2.2 FAR through rental use zoning, according to a city staff report, for a total of 8.3 FAR. But the developer is also seeking to transfer density from a nearby site at Wilson Avenue.

Jordan previously said the building would be the “highest density FAR in our city by far. Much more building on a smaller footprint than any other tower in Metrotown.”

Jordan compared the tower to another building on Broadway Avenue in Vancouver at Birch Street, which faced significant controversy and a tight approval vote in that city’s council.

That tower, she noted, was approved for lot of similar size – a difference of just about 20 metres squared – and came with similar density – 10.55 FAR, with a total of 28 storeys.

- With additional reporting by Dustin Godfrey