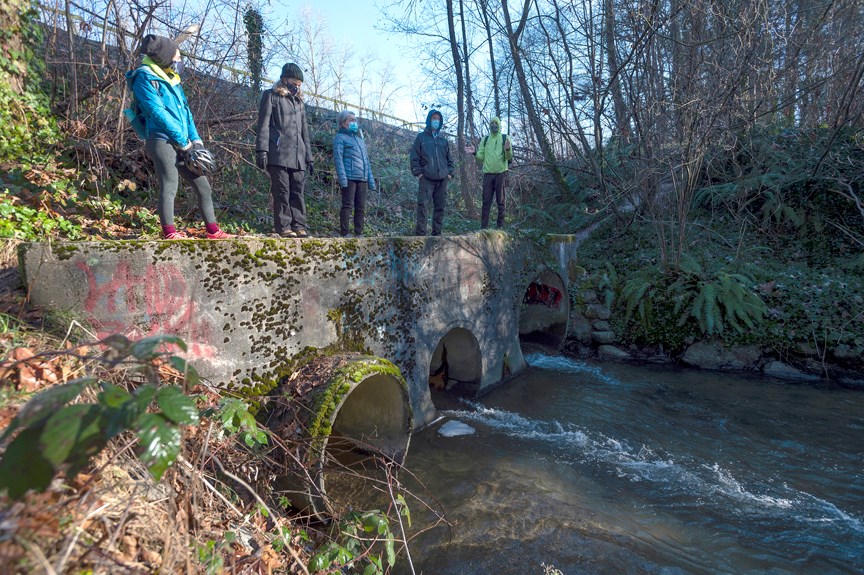 Ryan (last name not given), a member of the protect the planet stop TMX group leads a group of a dozen people on a tour of the Brunette-Fraser greenway, which will transform into a pipeline construction access road. Jennifer Gauthier

On Jan. 23, Protect the Planet Stop TMX hosted a protest of the Trans Mountain Pipeline Expansion.

It was held on Government Street at the Stoney Creek greenway, where geotechnical work has been done recently by TMX.

This trail runs beside Stoney Creek, which is an important salmon-spawning waterway. I live in the area and was shocked to hear that the Trans Mountain Pipeline Expansion will cross this sensitive creek.

The hosts of the protest believe the trail will have to close for at least a year, although that is to be determined if we can get this information from TMX.

This is a heavily used trail by walkers and cyclists. Also, students at Burnaby Mountain Secondary School use it to go from Eastlake Drive to get to the bus stop and other points on Government Street.

If this route gets closed, it will severely impact many people. I think it's unlikely that my neighbours are aware of this situation so I'm trying to ascertain exactly what TMX have planned for us. I will endeavor to communicate with the local people and get the word out.