Domestic assault call in July ended with canine clamped to suspect for up to 20 seconds
Feb 11, 2021 11:30 AM By: Cornelia Naylor 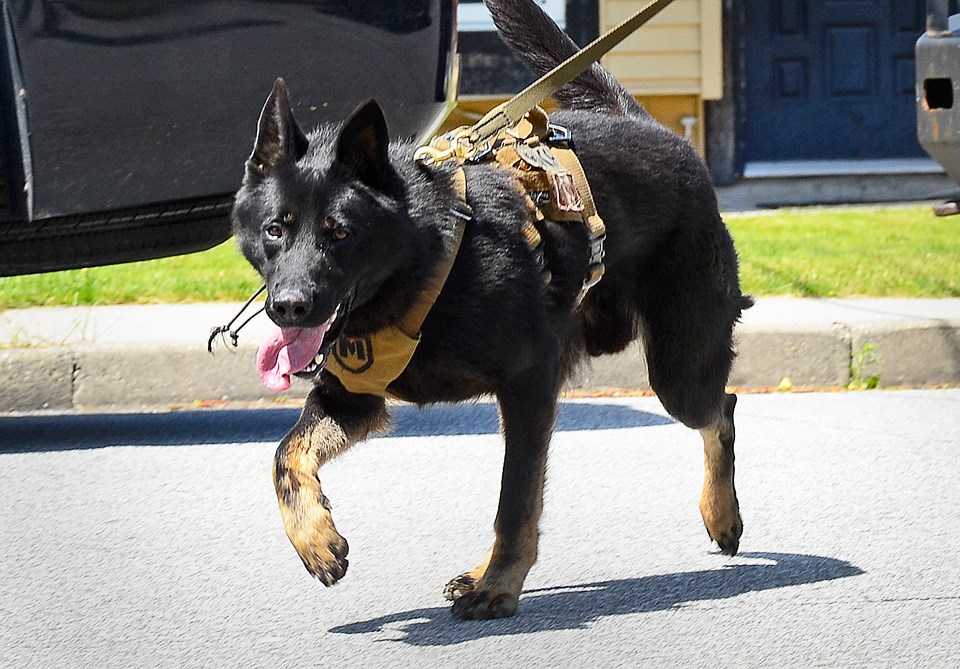 A police dog responds to an incident in Burnaby in June.Cornelia Naylor

A police dog handler has been cleared of wrongdoing in a Burnaby incident that saw his canine partner seriously injure a domestic-assault suspect's genitals after clamping onto him for up to 20 seconds.

The woman at the other end didn’t speak directly to the 911 operator, but she and a man could be heard arguing heatedly.

“Items of information passed to responding officers included an allegation that the home had recently been the scene of a domestic assault, and that (the man) was subject to a court-ordered condition that he neither contact (the woman) nor be at her residence,” stated a ruling by the Independent Investigations Office, the province’s police watchdog.

When police came to the front door, the man later told IIO investigators, he had left through the rear because he didn’t want to be arrested.

When officers failed to locate him, they called in a K9 unit.

Security video footage from a back alley captured that officer jogging behind a police dog, which was in ‘search mode’ on a longer leash when it suddenly ran from the alley around a large bush and made contact with the man.

A police witness told the IIO the dog’s bite lasted between 10 to 15 seconds, but the man said the dog remained clamped onto him for up to 20 seconds.

He was taken to hospital and found to have suffered “serious dog bite injuries to his genitals requiring extensive surgery,” stated the IIO decision.

Ron MacDonald, the chief civilian director of the IIO, said it was regrettable the man was bitten and “particularly unfortunate that he was bitten in a manner that caused a very significant injury” but said there were “no reasonable grounds” to suspect the officer may have committed an offence in the incident.

Although one police witness said the man had been simply standing with his hands to his sides when the police dog sank his teeth into him, MacDonald said the event unfolded “very  quickly” and in a way that would have been completely unexpected by the officer.

He also noted the officer had the authority to use “necessary and reasonable force” to arrest the man given that he was apparently in breach of a court ordered “no-go” condition and the circumstances raised "serious concerns of ongoing domestic conflict" if he wasn’t taken into custody and prevented from re-entering the woman’s  home.