Opinion: Burnaby rightly mocked for this sidewalk to nowhere, but changes are coming

The city has added millions to its budget for sidewalks
Apr 5, 2021 3:50 PM By: Chris Campbell 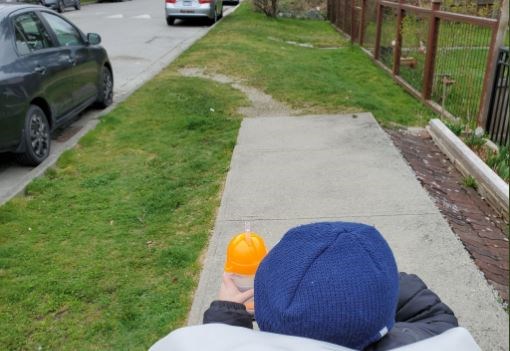 A sidewalk that just ends on 17th Avenue near 16th Street in Burnaby – also known as the sidewalk to nowhere.P.J. Kehres

“Find someone who loves you the way @CityofBurnaby loves inaccessible pedestrian infrastructure.”

So reads a tweet by P.J. Kehres about a sidewalk that just ends on 17th Avenue near 16th Street in Burnaby – also known as the sidewalk to nowhere.

“It's a step up from a lot of the streets in this neighbourhood, many of which don't have sidewalks at all or have them only on one side, or only parts of the street,” Kehres said. “Total patchwork.”

I mean, just look at that photo. Instead of curving the sidewalk to at least finish up at the edge of the grass/curb – so a person pushing a buggy doesn’t have to slog through the grass – it just ends.

You can see where people have trudged to get to the road because it’s all worn down.

The issue of sidewalks and pedestrian accessibility is one that is high on the minds of Burnaby residents. They write to me all the time about this.

The example above is hardly the only one, but I’m here to write that the City of Burnaby is trying harder – much harder – to improve its infrastructure.

Council has added millions of dollars to the city’s annual budget to add more sidewalks in the city.

One recent example involves a really neglected area in South Burnaby. A recent city staff report detailed upgrade plans for Marine Drive from Boundary Road to Patterson Avenue and from Sussex Avenue to Byrne Road with a budget of more than $6.7 million.

“Intersection improvements including geometry and signalization will be part of this project. The city is initiating detailed civil design for the first phase, which is Marine Drive, between Boundary Road and Greenall Avenue. This project will bring the street to the urban street standard, including multi-use path along the north side of the street, sidewalk along the south side of the street, roadway including curb and gutter, retaining walls, new bus bays, street lighting, parking accommodations, storm sewer upgrades, sanitary service upgrades, and water main upgrades. The goal of this project is to improve traffic operations, accessibility and safety for all users.”

And then there's this "classic" bike lane on Willingdon Ave, #Burnaby pic.twitter.com/RIsznCODP4

The city is calling the Marine project adding an “urban trail” on the north side of Marine and a new sidewalk on the south side, meaning “there will be the need for retaining walls in many areas and re-grading of driveways.

This is just one of multiple projects going up around the city, so while there are bad examples out there, at least the city is looking to make changes for the better.

Now, if we could only get some separated bike lanes on major routes.

Opinion: Couple with no conscience let dog defecate at Burnaby cemetery and then just walk away
Apr 3, 2021 8:42 AM
Comments