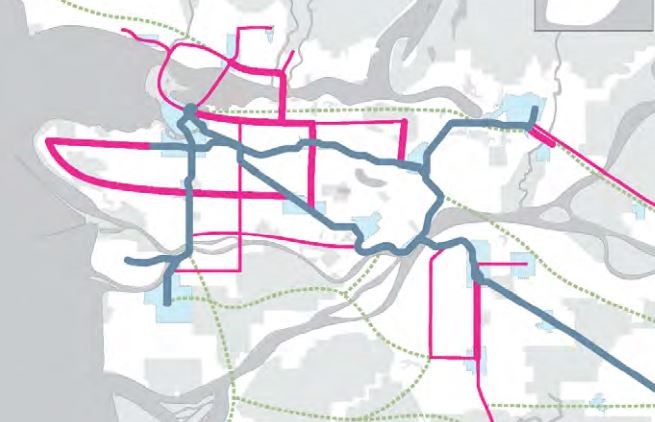 TransLink takes a lot of abuse for how it runs its services, spends money and plans for the future.

So when I see something I like, it’s important to give TransLink a tip of the hat. One small thing I noticed in the transit authority’s Transport 2050 document – which sets out a vision for transit well into the future – was a thick red line in two maps.

The thick red line marks a rapid transit line between Metrotown to Brentwood – the two busiest transit hubs in the entire city. The line could be above or below ground and runs roughly along Willingdon Avenue.

The line is in the Network A and Network B visions that are the centrepiece options in the Transport 2050 document. TransLink is looking for more feedback on the document.

Rapid transit like SkyTrain between these two Burnaby transit hubs makes perfect sense. It would link two city centres heading north and south, the way SkyTrain does between New Westminster and Lougheed.

I don’t know if it’ll ever get built, but at least this is on TransLink’s radar.

The document also says: “The Network B approach to expanding our rapid transit network would add about 400 more kilometres to our rapid transit network. It would still include about 50 kilometres of new above and below street level rapid transit on those corridors where it is required to meet forecast peak ridership volumes. But, in Network B, the remaining investment would be put towards an additional 350 kilometres of street-level rapid transit. A trade-off to building more new rapid transit at street-level is a need to change the way our streets are used. While in some cases, new lanes may be able to be added to existing roads to accommodate street-level rapid transit – in most cases it would be achieved through a reduction in general purpose traffic lanes, resulting in less road space for non-transit vehicles. In other cases, it is possible to achieve new transit lanes through a reduction or elimination of curb side parking which could have impacts on local businesses and residents if not managed appropriately.”