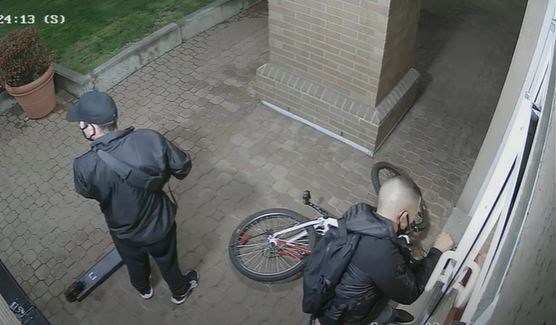 When we moved into our condo in Burnaby, we felt satisfied about the security measures that were touted in the listing.

Oh how naïve were we.

Several break-ins and mail thefts later, we’ve implemented our own security measures, such as changing all of our accounts to only electronic billing/notices so there’s nothing to steal from the mailbox.

We also store our bicycles in a spare room instead of in the “secure” locker area that was about as hard to break into as the U.S. Capitol earlier this week.

We’re not the only ones.

Police are looking for help finding two men who broke into a Burnaby apartment building, stole stacks of mail and then made their getaway on a bicycle and scooter.

A video released by the Burnaby RCMP shows the men prying open the front door of an apartment building in the 6500 block of Bonsor Avenue at about 5:30 a.m. on Oct. 1.

Just watch the video below and see just how much of a joke the building’s locked door is. The dude gets in easily and then the video shows a thief prying open a row of mailboxes in the mailroom while the second man follows behind gathering up the mail from each box.

COVID-19 hasn’t helped the situation. If your building is anything like mine, the number of people out and about in the lobby and underground parking area will have dwindled significantly.

Police are now asking anyone who might recognize either suspect or have information about the break-in to contact the Burnaby RCMP at 604-646-9999.

“Check and empty your mailbox daily,” Cpl. Mike Kalanj said in a news release. “Ensure mailbox security is a priority because it doesn't take long to become a victim of mail theft.”

How true is that?