Refugee family arrived in Burnaby during COVID with no computer, one cell phone to share

Mom Raghda Mallok, 47, went from not knowing how to use a computer mouse to writing email, making Zoom calls and translating school letters from English to Arabic thanks to school district program.
Jan 11, 2021 11:04 AM By: Cornelia Naylor 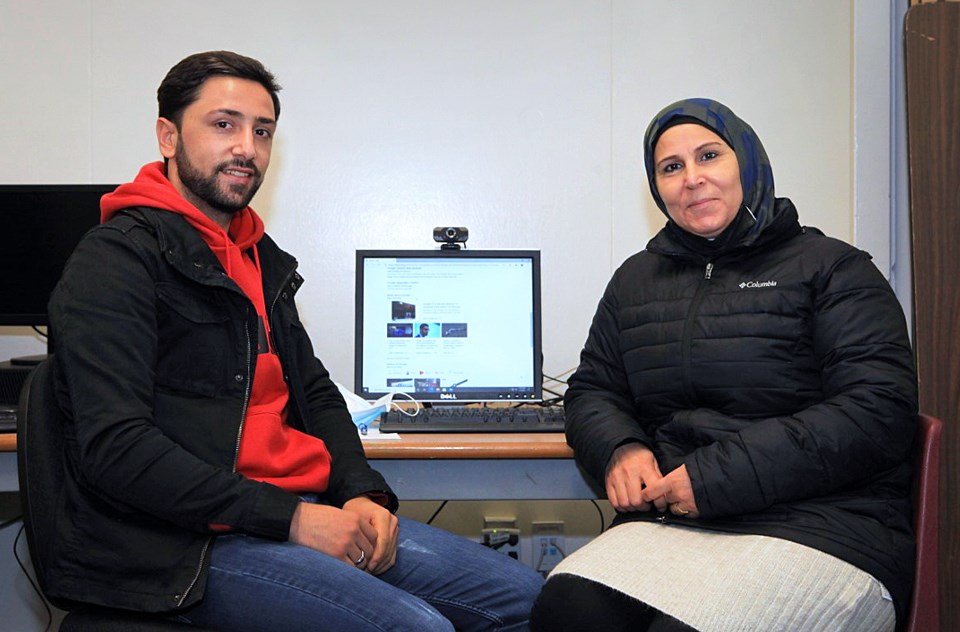 Anas Al Salo and his mother, Raghda Mallok, came to Burnaby in September after fleeing violence in Syria several years ago. Neither had ever used a computer until taking a Burnaby school district program last month.Kay Lim-Gatehouse

Before 26-year-old Anas Al Salo came to Burnaby as a refugee – back when he was a teenager in Turkey single-handedly supporting his family by working long hours at whatever jobs he could find – he had heard people talk about computers and how amazing they were.

“I used to hear from people that the computer is great for people,” he told the NOW through an Arabic translator. “It’s like if you want something, you can just Google it, and it gives you directions if you want to go to a restaurant or find a service; that’s what I heard from people.”

But Al Salo, who is originally from a small town close to Aleppo, an area decimated during the ongoing Syrian civil war, had never used a computer, let alone owned one.

When his four-person family finally arrived in Burnaby in the middle of the COVID-19 pandemic in September, the only thing connecting them to the rest of the world was a single cell phone.

That changed last month, thanks to a program through the Burnaby school district.

From Dec. 1 to 17, Al Salo and his mother, 47-year-old Raghda Mallok, went through a basic computer literacy course at Edmonds Community School.

At the end, they were gifted a desktop computer and webcam provided by the BC Technology for Learning Society.

The course and computer have opened up a whole new world of opportunity, they said.

Mallok, who needed a whole session just to get used to maneuvering the computer mouse, now knows how to send email, make Zoom calls, translate school letters from English to Arabic using Google translate and more.

“It’s like a dream came true, especially for me,” said Mallok, who married at age 14 and has two married daughters in Turkey and two sons in Canada. “I had never thought I’d be working a computer.”

Anas said it was a good feeling to find out he could do all those things he’d heard about once he got a chance to use a computer.

He and his mom are now taking English classes via Zoom.

“For me to be able to go on Zoom and study, that is huge,” Mallok said through the translator.

The COVID-19 pandemic has been hard on newcomers and refugees, and the school district’s Settlement Workers in Schools program has seen a sharp increase in families, especially the most vulnerable newcomers to Canada, looking for help, according to district settlement services coordinator Natalya Khan.

“Like everyone else, we found ourselves very abruptly in this situation with little time to prepare for how it would change our work,” she told the NOW. “Normally in-person contact plays a significant role in what we do. When the pandemic hit, virtually all services for families were transferred online or by phone, so everything is being done remotely unless it is an emergency. Federal and provincial programs also went online, and families needed help with this – for example many families needed help connecting with CERB, about whether and how they could access it.”

On top of that, newcomer families without digital skills or access to technology were faced with their children having to learn remotely from home.

The district decided to put together a basic computer course targeting families in the Burnaby school district who didn’t have digital literacy skills, spoke very little English and had limited finances.

So far, the course has been put on in Arabic and Tigrinya (a language spoken in Eritrea and northern Ethiopia) to seven refugee families who learned about using computers, the internet, school websites and email, so they can better support their kids as they settle into their new schools.

He was given an iPad to use for school work, thanks to a school district partnership with Simon Fraser University’s Friends of Simon program and Rogers, which has seen 15 tablets handed out to local students who are new to Canada.

And the rest of the family now has the desktop and webcam to use.

“Feelings of isolation are common during the pandemic, and this is one more thing that people new to Canada are working through as they face multiple challenges,” Khan said. “Access to technology and support with the skills to use it can help.”

But the need is great, she said.

There are currently 40 people on the waitlist for the new computer course, and the district plans to make the program one of its regular offerings, starting with more sessions this month.

Khan calls it one of the “silver linings” of the pandemic for newcomer families who need computers and the skills to use them.

“Before we could work around newcomers’ computer illiteracy because we could work with them in person,” she said. “The pandemic has made it more important than ever for immigrants and refugees to have those computer skills. I’m so happy about the program because this vulnerable population really needed these skills, and we are so pleased to be able to provide it via settlement services with the support of our partners.”

Burnaby school officials, MPs call on feds to up funding for newcomers, refugees
May 10, 2019 9:27 AM
Comments