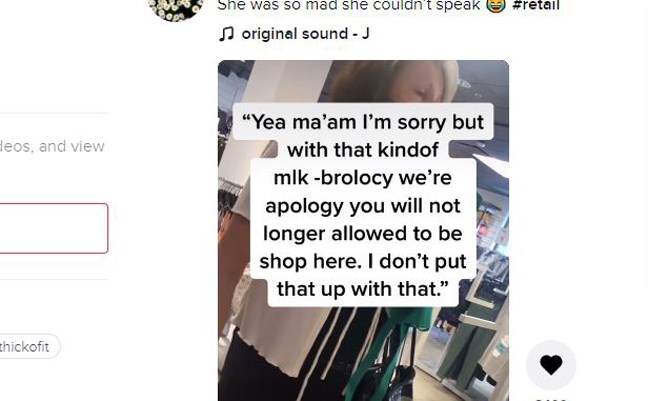 A response from a local clerk after a confrontation with a customer.Screenshot

I receive a lot of complaints in my inbox about everything you can imagine.

One of the top categories is customer service.

For example, one shopper wanted a big story done recently because she was in a store washroom stall that had run out of toilet paper. Now I know that sucks, but that isn’t necessarily grounds for a newspaper to write a story. (It turns out the store had profusely apologized and given the customer a large gift card, but even that wasn’t enough to assuage the anger of the customer – which I get.)

Then there are some customers who complain about their treatment even though it turns out they probably deserved it.

One such customer wrote in complaining that a store clerk had filmed her and posted a video on Tik Tok after the two women got into a “confrontation” over social distancing.

I’ve seen the video and it’s short and you can’t really tell who the shopper is because she’s wearing a mask and there are large graphics pasted over her face. There were others that were apparently posted with more details about the customer, but it seems the clerk has wisely taken those down.

So this shopper explains what happened and it turns out she did a terrible thing and likely deserved to be shamed, although she offers an explanation that will divide people.

“One of the workers and I got into a confrontation. She accused me of not social distancing enough so I kindly obliged and made sure I was keeping my distance as much as possible. This was, unfortunately, apparently not enough for the young lady working that day as I was then threatened with having security called on me.

“The next thing I knew, the staffer had her phone out and was recording me in the store. I made a comment about her weight that I admit I never should have made. She accused me of calling her ‘fat’ which were not the words I uttered but nevertheless I was still rude in my remarks. I felt bad and immediately went back to apologize. This does not excuse my actions but I had just lost my husband three days prior to this incident and was not in my right frame of mind.

“I thought that would be the end of it but then I discovered that this staff member put videos of me on her Tik Tok. The videos were taken out of context and do not show the totality of the situation. The worker also states that I pushed her, when I did not. The videos at one point had hundreds of thousands of views on them, and there were even comments from the staff and others saying where I worked. I went back and apologized but this woman is choosing to continue to upend my life and derail my career over a moment I sincerely regret.”

So, we have a lot to digest here.

On the one hand, making a comment about someone’s weight is a terrible thing to do. There really is no excuse for it. Once those words come out of your mouth, you really lose all credibility and even an apology won’t erase the pain it causes. I know because I've had people do that to me about my weight. The person who wrote to me just couldn't comprehend why the clerk wouldn't just accept the apology. Well, because "sorry" just doesnt' always make up for what you said.

Then again, if you had just lost a spouse, I can also understand how you might lose control during a confrontation.

Ultimately, the shopper should have just walked out of the store when the confrontation started. If you’re emotional because you're grieving then there’s no point in arguing with someone over such a nothing thing.

Easy to say, of course, because it’s hard to do when you’re being confronted. But the clerk can’t walk away – they work in the store – so be that person that just ends it.

As for the clerk, I totally get it. They are on the front lines and enforcing the rules and need to stand up for themselves. Also, being fat shamed is ugly and humiliating. I can’t blame them for wanting to shame the customer right back.

In many cases during the pandemic, it’s been enlightening to show anti-maskers berating workers for simply trying to enforce the rules.

But is the answer posting videos on social media?

Feel free to let me know your thoughts.