The proposal comes about a year after council directed staff to investigate a solar pilot project at the city hall campus
Jan 21, 2021 4:33 PM By: Dustin Godfrey 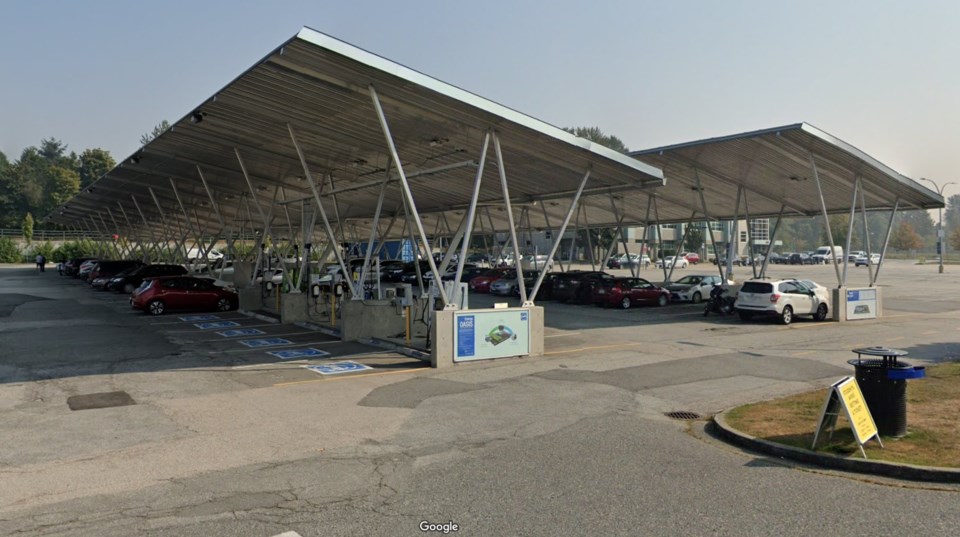 Burnaby city staff pointed to these canopies, which have solar panels on top of them, as what the city hall solar panel pilot project could look like.Google Streetview/Screengrab
A parking lot at Burnaby City Hall may soon get a bit of shade, while also providing zero-emissions energy, as the city inches closer to a solar panel pilot program.

The city has been considering building solar on its properties for about a year, and city staff has come to the environment committee with three options – rooftop installations on either the city hall main building or west building or a ground-mounted installation over the parking lots and/or courtyards.

Of those three options, staff suggested the ground-mounted proposal would be the more straightforward option, since it doesn’t come with load-bearing requirements as the rooftop options do. Staff specifically suggested the city put the panels in the parking lot that houses its fleet of vehicles, saying the parking lot has no tall structures or trees in the area to reduce sunlight exposure.

That aside, staff said each option was found to come with similar carbon emission offsets (9.7 tonnes of CO2 equivalent per gigawatt-hour of electricity produced). Each option would also pay itself off through energy savings within 10 to 15 years, not including any structural upgrades to buildings for rooftop panels.

Staff noted neither roofs have the load-bearing requirements to support solar panels, largely due to snow and wind load requirements. To be able to carry rooftop panels, staff said city hall would need “extensive structural upgrades.”

“This would be true of any building, regardless of its age, that was not originally designed for rooftop PV (photovoltaic) solar,” reads the staff report.

The staff report pointed to parking lot shade structures with solar panels at BCIT as an example of what the city could do in its own parking lot.

A feasibility study estimated city hall’s two parking lots could fit more than 2,000 solar panels, though staff suggested starting much smaller at about 100 panels. That would allow the city to acquaint itself with solar technologies, learn about BC Hydro’s metering programs with solar and determine the performance of solar before going all in.

Those 100 panels would, together, produce about 43 megawatt-hours (about enough to microwave 860,000 bags of popcorn, according to Waterloo North Hydro) and would cost the city around $150,000.

Staff said the electricity generated from the solar panels could be put to quick use by helping to power electric vehicle charging stations in the lot.

City staff is seeking council approval to proceed to designing a pilot program for the solar panels.