Burnaby students teach each other how to debate – and win

Captains of Alpha Secondary School's student-led, student-run debate team say learning how to debate gets people out of their echo chambers.
Feb 1, 2021 2:49 PM By: Cornelia Naylor 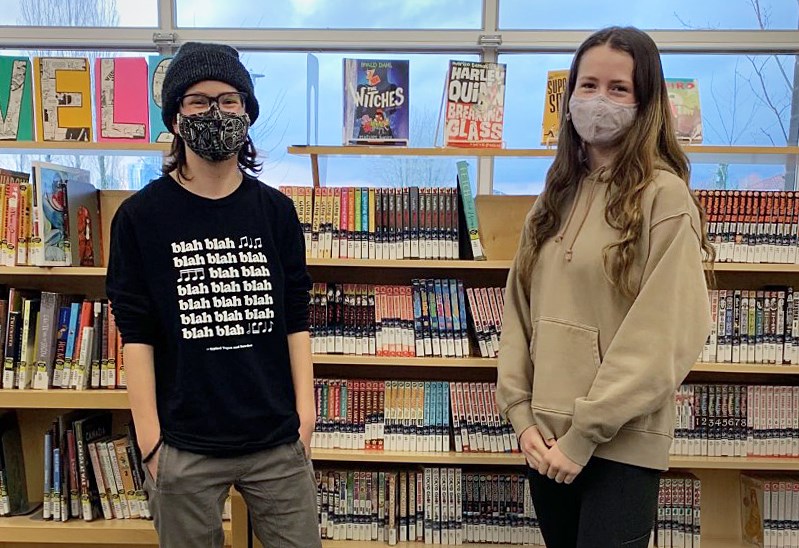 Alpha Secondary School debate team captains Lilah Williamson and Nica Fleming are ready to lead their student-run team at the provincials this month.

Every time Burnaby’s Alpha Secondary School wins the top school award at the Lower Mainland East debate tournament – and they’ve done it three years in a row now – they earn bragging rights for more than just their rhetorical skills.

The student-run and student-led team also gets the satisfaction of knowing that they got there on their own.

“Everything I’ve been taught about debate was taught by another Grade 11 or Grade 12 student,” says co-captain Nica Fleming, who joined the club in Grade 8 and is now in Grade 11.

She and fellow Grade 11 student Lilah Williamson took over the team this year – starting in September with a successful campaign to recruit a fresh crop of Grade 8s.

Since then, in two-and-a-half-hour meetings twice a week in the spacious school library, the veterans have helped the newcomers hone their skills.

“We don’t get a lot of people who join the club who have debate experience,” Williamson says, “and so we have to teach them all the technicalities of debate and how it all works, and that it’s not like just having an argument with your friend.”

Unlike some of their competitors, who pay for professional coaching or have courses dedicated to debate, Alpha’s debate team has been student run and student led for about seven years now, and that’s a source of pride for the co-captains.

She thinks that approach might even give Alpha debaters an edge in competitions.

Alpha earned the top school award at the Lower Mainland East tournament for the third time in a row in January, qualifying five out of its nine teams for the provincials later this month.

Williamson and Fleming placed second as a team in the senior category of the competition, which had to be moved online because of COVID-19.

As individuals, they placed second and sixth respectively out of 38 senior speakers.

Williamson, who plans to become a lawyer one day, hopes to make it to the nationals this year.

But Fleming feels pretty good about what the team has achieved already.

“Taking over the team this year, I mostly wanted to see the rest of the team do well,” she says, “so I’m pretty happy with where we’re at. I’m glad that we won the big trophy back for the school.”

One thing the two agree on, though, is the value of competitive debate, which often requires participants to argue both for and against the same proposition – whether they agree with it personally or not.

“I think it’s just really good to force yourself, one, just to learn a lot about an array of topics, and then also just force yourself to take on the position of something you might really not agree with because then, even if you’re against that, you come out having stronger reasons for why you are against it,” Williamson says.

When asked if such a skill is more important now than ever, Fleming says, “Well, ‘now more than ever’ is a cliché, but it feels like there’s so much political discourse right now everywhere, especially for young people on the internet, and it’s good to be able to think about what other people are thinking and not just kind of go on with your own beliefs really angrily.”

Refugee family arrived in Burnaby during COVID with no computer, one cell phone to share
Jan 11, 2021 11:04 AM