Maskless woman blows up and flashes everyone in a Burnaby restaurant

Woman also makes racist comments after being told to wear a mask
May 13, 2021 1:30 PM By: Chris Campbell 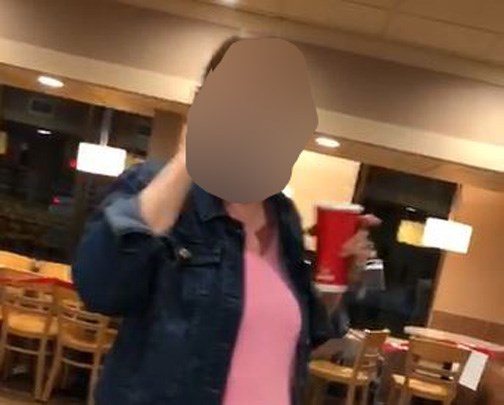 This woman got upset after being told to wear a mask in a Burnaby restaurant.Screenshot

A trip to get some burgers turned into an expletive-filled argument over masks at a Burnaby fast food restaurant that also included everyone getting flashed by a woman.

It also got racist just days after a series of rallies in Burnaby to combat anti-Asian racism.

Rei contacted the NOW with video of a confrontation that took place this week at the Wendy’s on Kingsway (the video only shows part of the confrontation and includes someone filmed without their permission so it hasn’t been included here).

Rei was waiting for his order when a woman walked in without a mask. When she got to the counter to order, staff asked her to put on a mask to comply with public health orders.

“She exclaims, ‘I forgot, so here’ and proceeds to pull her shirt over her face from the collar,” Rei said. “Ridiculous. The cashier still refuses and she gets a bit agitated and instead this time pulls her shirt from the bottom completely over her face and says, ‘are you happy now?’ … She had everything to show. The worker manages to give her a disposable mask and she does put it on but she keeps saying it’s ridiculous and she shouldn’t be punished for just forgetting a mask.”

That’s when Rei chimed in to say that it was “unacceptable” to still be forgetting to wear a mask after so many months of the COVID-19 pandemic rules.

Rei is Asian and there was a food delivery driver who was a person of colour. That’s when the woman accused them all of being “racist” and against white people.

“She kept going on and on and eventually using her hands to slant her eyes and come close to me and say, ‘you slanty-eyed monkey’ - that’s when I decided to pull my phone out and start recording,” Rei said. “She got a lot more quiet but as you can tell, she’s extremely racist.”

Burnaby RCMP recently reported that the city had seen a 350% increase in anti-Asian hate crimes, which prompted the city to proclaim May 10 a day against anti-Asian hate.