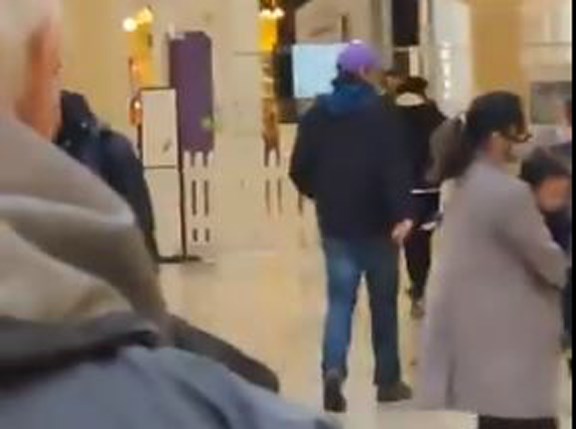 Daryl Dela Cruz posted a video on his Twitter feed of a dude just taking a stroll through Burnaby’s biggest mall – Metropolis at Metrotown – without a mask.Screenshot

The stricter rules on masks set out by provincial health officer Dr. Bonnie Henry have been in place for a couple of months now so people should be up to speed and aware of them.

And yet, some folks seem to be deliberately defying these rules based on two separate incidents, including one in Burnaby.

I say deliberately because I’m just not buying that this was a case of forgetfulness.

Daryl Dela Cruz, known to the NOW for his passionate support of the Burnaby Mountain gondola project, posted a video on his Twitter feed of a dude just taking a stroll through Burnaby’s biggest mall – Metropolis at Metrotown – without a mask.

“This guy in the purple hat just walked straight into (the mall) with no mask on,” said Dela Cruz. “He was waving his hands and clapping his arms acting a s if he owned the place. I think his motives are clear.”

COVID-19 is killing people and this guy thinks it’s just fine to ignore the rules all of us are following. It’s infuriating. Watch the video below.

This guy in the purple hat just walked straight into @MetropolisatMet with no mask on. He was waving his hands and clapping his arms acting as if he owned the place. I think his motives are clear. @BurnabyRCMP #covid19bc pic.twitter.com/5zObmKc2pM

This incident follows video circulating on social media showing an unmasked man in a Langley grocery store who was allegedly spreading misinformation about COVID-19 vaccines.

The video, which was taken at a Langley Superstore and shared by @adhdwitch on TikTok last week, shows an unmasked man standing in line behind a woman in an olive-coloured coat. While the woman in front of him pays for and bags her groceries, he turns his attention toward the woman filming the video.

"We were having a discussion. Why are you videotaping?" the man asks the person recording.

The woman writes in her TikTok video that she was filming the encounter because the man was "spouting [vaccine] misinformation" and telling a healthcare worker that she didn't have the correct information. She adds that she was "terrified" while recording it and that the health care worker was "visibly unsettled."

Toward the end of the video, the man asks the woman filming: "Are you dead yet? You can read more about it here, but it’s really something.