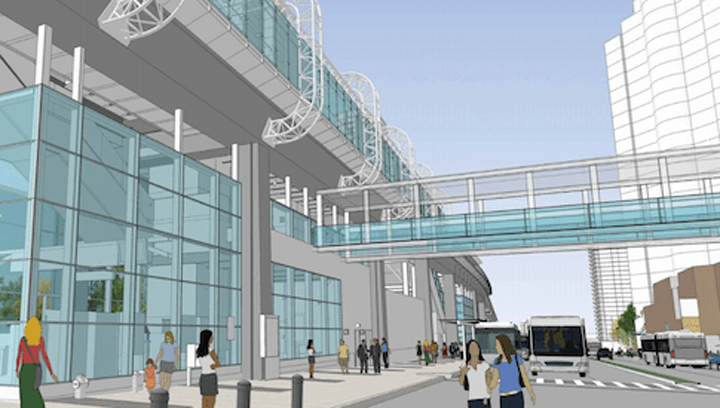 A rendering of what bridge would look like if built.TransLink

The City of Burnaby says a replacement for the Metrotown pedestrian bridge has been shelved - for now.

The project was aimed at adding a new pedestrian bridge between the Metrotown Skytrain station – the busiest in all of Burnaby – and the city’s biggest mall, Metropolis at Metrotown.

But a variety of factors have seen the project stall, including COVID-19 and other development projects being considered on the mall property, including a $460-million events centre.

“We are hoping to pick up this work in the coming months, but there are no imminent plans to replace that structure,” said a statement from the City of Burnaby. “We were looking to coordinate any future replacement of the passerelle (pedestrian bridge) with the replacement of the existing transit loop on the Ivanhoe Cambridge (Metropolis) site. The transit loop was an identified location for the Metrotown Events Centre, but it could also be a mixed-use development site, which would be the location to receive the replaced passerelle. Our work on the Metropolis Master Plan with Ivanhoe Cambridge was unfortunately put on hold due to the pandemic.”

The city noted that improvements that TransLink undertook to the station in 2018 have “improved the surface crossing of Central Boulevard and the vertical circulation into the station.”

The project was originally listed in the city’s 2019-2023 Financial Capital Plan.

Since the previous bridge closed in 2016, pedestrians have used crosswalks on Central Boulevard to access Metropolis at Metrotown – leading to overcrowding at times on the sidewalks surrounding the SkyTrain station and the mall.

Metrotown Station opened in 1986 and sees the second-highest amount of foot traffic of any SkyTrain station in the Lower Mainland, with more than 8,000,000 boardings.

The station went through extensive upgrades by TransLink, with the addition of new escalators, better lighting and signage, and an extension of the platform roof.